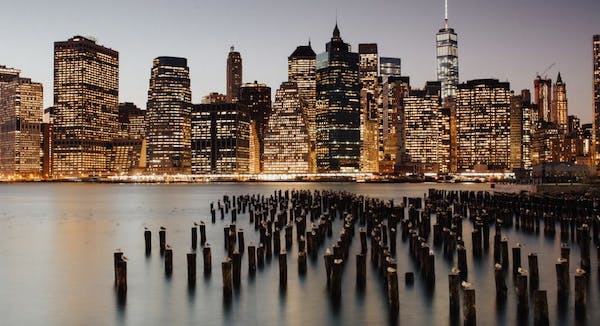 Trade the Sky Tower of Auckland for the Empire State of the Big Apple by hopping on cheap flights to New York from New Zealand. They'll whisk you halfway around the globe (a whopping 8,760 miles, in fact) to one of a trio of major airports – Newark, JFK, or LaGuardia. From there, the metropolis is your oyster. You could spend romantic evenings ice skating under festive trees in the Rockefeller Center. You could clip clop on horse and carriage through leafy Central Park. You could scale the Statue of Liberty or encounter the wild creatures of Bronx Zoo, zip up the Hudson to see historic colonial towns or delve into Manhattan for the bright lights of Broadway. It's endless.

Central Park has romantic walking routes, ice rinks (in the winter), and urban lakes – it's a must-visit in the heart of Manhattan.

MoMa is one of the leading art galleries in New York City. Drop in to catch works by the likes of Andy Warhol, Cezanne, and van Gogh.

You only need to hop on the Staten Island Ferry to appreciate one of the most symbolic buildings in the United States: The Statue of Liberty

What is the best airline to fly to New York?

Qatar Airways is the best airline to fly between New Zealand and New York. If you want direct flights then Air New Zealand is best.

I Know The Pilot finds you the cheapest New York flights

At I Know The Pilot we are always looking out for cheap flights to New York. As soon as we find a good deal, we post it to the website and our apps. These cheap prices to New York on are very popular and can dissappear quickly. Subscribing Is the only way to make sure you don't miss out.

I Know the Pilot